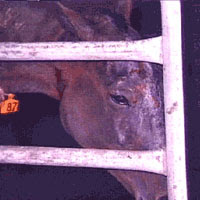 The Animal Welfare Institute has announced that last week, the South Dakota state legislature introduced a bill to make up to $1 million dollars available to ANYONE who wishes to construct and open a horse slaughtering facility in SD.

While the American Horse Slaughter Prevention Act has languished in the bowels of our federal bureaucracy for years, if anyone has any question how fast the government can move when big business tells them to jump, South Dakota shows the American people who our “public servants” are really interested in serving.

Despite only being introduced seven days ago, S.B. 170 already has a hearing scheduled in the Senate Agriculture Committee this Tuesday, 1/29/08 at 10:00 am.

Though built in South Dakota, a horse slaughter plant in any state will profoundly affect American horses everywhere and we have the right to speak out against this shameful and disgraceful move by those who only measure life by the pound!

!!CALL TO ACTION!!
Here’s what you can do to speak up for those who can’t!

The following information was copied from AWI’s Action Alert about what you can do. To view their press release in full, go to: http://www.awionline.org/legislation/eAlerts/2008/012708.htm

1. Please call all members of the South Dakota Senate Agriculture and Natural Resources Committee to let them know that you oppose S.B. 170. If you live in South Dakota, tell them. However, you needn't be from South Dakota to call - passage of S.B. 170 will affect horses and people from across the United States. They can be reached at their Capitol offices by calling the operator at 605-773-3821.

2. Call your United States Senators and Representative and urge them to cosponsor and support speedy passage of the American Horse Slaughter Prevention Act (S. 311/H.R. 503). The federal bill, which has enormous and growing Congressional and public support, will prohibit the slaughter of horses in the United States for human consumption, as well as their export for the same purpose. Its passage will nullify S.B. 170 or any similar legislation. You can reach your legislators by calling the U.S. Capitol Switchboard at 202-224-3121.

In addition to your own feelings on horse slaughter, here are some points to raise in your calls:

Americans overwhelmingly oppose horse slaughter and this has resulted in the closure of the remaining foreign-owned domestic plants. South Dakota would be out of step with public sentiment if the state legislature passes S.B. 170 into law and this will reflect unfavorably on the state.

The overwhelming majority of horses they would slaughter come from other states, including stolen horses and horses sold under false pretenses.

Given that the federal American Horse Slaughter Prevention Act is anticipated to move in 2008, the loan made available via S.B. 170 would be fool hardy. The state risks pumping scarce taxpayer dollars into an industry that is likely to be shut down under federal law.

The FY 2008 Omnibus Appropriations bill (which funds the federal government) currently before Congress includes a provision that prohibits the use of federal tax dollars for the inspection of horses going to slaughter ? without which the animals cannot legally be slaughtered. It is anticipated that like measures will be included in future spending bills, too. South Dakota could find itself with a slaughterhouse that cannot operate due to federal funding restrictions.

The REDI fund, through which the loan would be made, is designed to promote job growth in South Dakota. The fact is that a horse slaughter plant would employ only a handful of low-paid, unskilled workers who are more likely to be a drain on the economy than a bonus.

The establishment of a plant in South Dakota would have a negative environmental and economic impact on the hosting jurisdiction. Disposal of blood, tissue and other waste associated with operating a plant would likely stress pre-existing sewer systems and could even require significant public expenditure to fortify the infrastructure.
American Herds offers these other suggestions to help protect American horses from this cruel and inhumane fate!
Introduced on 1/22/08 with the hearing scheduled just 7 days later, you can read S.B. 170 for yourself at the following link- http://legis.state.sd.us/sessions/2008/170.htm

Help make the people of South Dakota aware of what their representatives are planning to pull right under their noses by contacting as many media sources before Tuesday as you can.
Here are some quick links. You can write one letter and send it to all of them to let your voice be herd!

Here’s a list of TV News Email addresses too!

KEVN FOX news has an online form for contacting them -

http://www.kevn.com/ContactUs.aspx
Posted by Preserve The Herds at 4:21 AM

Indeed a shame. Imagine our founding fathers looking down from Mt. Rushmore at a kill house spewing pollution and butchering the very animals that help build this country.

You just wonder who is behind this. Can James Tucker be peeking from the wings? There must be a lot more to this than meets the eye. With the Appropriations bill and AHSPA, who on earth would fund this and with hard earned tax dollars, no less.

The alternative is horses being shipped out of the US where they are slaughtered by inhumane means rather than USDA approved methods (captive bolt, instant brain death, etc; they are stabbed in the spine and bled out instead). Read up on how they are slaughtered in other countries and read Temple Grandin's report on following horses destined for slaughter in Mexico--many are worked w/o food or water until they collapse in death.
Folks may not like the idea of slaughtering horses in the US, but think of what happens when they are out of USDA-inspected rigs and facilities.

Anon, the captive bolt did not provide instant brain death. The CB was designed for cattle. Horses' brains are set further back. There is plenty of documentation on this as well as footage on how it doesn't work on horses. Yes, the transport to Mexico is horrific but so was the transport to the kill houses in the US. The horses were mistreated from the time the kill buyers got their greedly little paws on them. Temple Grandin is pro slaughter and designed cattle slaughter houses. Not a good person to quote.

Anyone that does not own a horse should keep thier opinion to themselves concerning the personal property of other law abiding Americans. Trying to tell me what to do with my personal property is un-American. I personally feel all good Americans shoud be more concerned about starving people in other countries. Horses For African could feed thousands.

Anon,You've obviously bought into the pro slaughter propaganda. How does it feel to be duped into believing all those lies? I can talk because I have 4 horses currently and all of them at one time were slated to go to the slaughter house. None of them are old, crippled, or crazy or sick. Although you are entitled to your own opinion, once wives were personal property of men like you..God forbid.. People may look at you and think that you're stupid but when you open your mouth and spout off with garbage like that, they KNOW that you're stupid. The captive bolt was NOT designed to kill the horse.. rather to render it unconscious. Horses (in case you've not ever looked at their anatomy) are not built like cattle, hogs or sheep.. they have the ability to move their heads and necks to avoid such things as the captive bolt and your weapons (obviously you're guilty of battery on your horses). I wonder if you actually do own any horses considering the way you talk.. or maybe you're one of those mass breeders who don't breed for quality but rather send all your so-called rejects to the kill auctions. Thanks to all of you stupid breeders for handing down such wonderful horse flesh for what?... 25 cents a pound.. Such a shame that you would support an industry that lies, cheats, steals and abuses the horses as they do. Shame on South Dakota's legislators who support this wretched industry and shame on you who support horse slaughter. Will the pro slaughter clowns ever learn?? Sad state that this country is in when moral values are overidden by monetary gain.. shame on you all!!

THERE IS A GOD!! JUST GOT WORD THAT THEY KILLED THE BILL!! NO HORSE SLAUGHTER PLANT FOR SOUTH DAKOTA!!

Owning an animal does not give you the right to abuse the animal. Without laws, you have people like Michael Vick that abuse animals for profit. Horses are not food animals in the US. It is illegal to buy or sell horse meat for human consumption – a law that was passed years before the kill houses were shut down. Do you propose we start allowing owners to have their dogs and cats butchered to fill the market for China?